The years have come and gone quickly, and Face and Reese are no longer the precocious, young street thugs who vandalized the streets of Philly. Older and polished, they are two young men focused on strictly winning in the drug game; a feat few succeed in.

After meeting Drug-lords, Rico and Jose Gomez, all their childhood fantasies have become reality. Amble cash, expensive-luxurious cars, and beautiful women are at their beck and call.  Life could be no better…

With Reese, Tasha, and his beloved mother Pamela by his side, Face sets his plans in motion to become the best whoever did it. Determined to succeed by any means necessary, he’ll stop at nothing, even if it means leaving a long bloody trail from those who stand in his path.

Beyond the harsh ghetto streets are the dark shadows of enemies from Face’s past- who secretly watch and plot from a distance. In this brutal real-life chess game each opponent is determined to bring Face down for good, and destroy all he has worked so hard for. Will they succeed?

Black Scarface II-The Rise of an American Kingpin-is the sequel to the Bestselling novel, “Black Scarface”. This powerful, realistic tale of money, power, respect, loyalty and love follows a young man’s journey to become a living legend, and the most prominent drug kingpin in U.S. history. 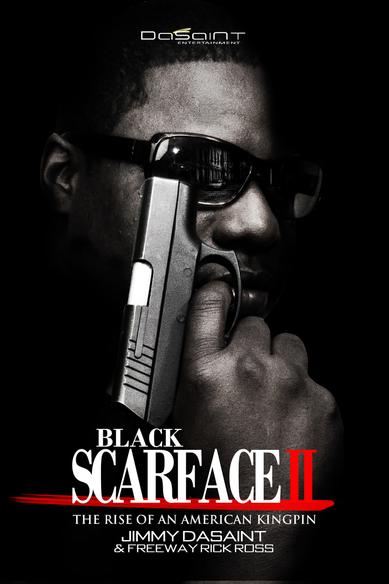